I had the greatest race weekend ever!  I did TWO races in one weekend!!

I traveled to St Louis on Friday afternoon with my friend Meghan and her wonderful mother Jo.  We arrived a little late, but squeaked in enough time to get our race packets for the weekend.  I was excited to get two more race shirts!  They had an expo, but we were possibly parked illegally, so we headed right out.

We wanted to get in the little Italy section of St Louis at a restaurant named Zia's.  The streets of this area are very narrow and lined on both sides with cars.  Meghan had fun navigating and parking her mom's giant SUV, but she did great!  We were disappointed in the 1.5 hour wait at Zia's, so we found a little sports bar down the road with no wait and -bonus- they had the Royals game on!  We had a delicious St Louis style pizza before heading back to the hotel and crashing at 9pm.

Saturday morning came early and we had to head downtown earlier than we would have liked to find a parking spot.  It was FREEZING.  Luckily for a 5K, I didn't mind dressing in multiple layers.  There was a good crowd of runners (1334 to be exact), so this would be the biggest race I have been in.  I felt pretty good the first two miles and by mile 3, the outside of my knee was killing me.  It wasn't so bad that I couldn't finish or run, but it definitely hurt bad.  I had a decent time- it wasn't a PR or anything, but I was happy.  I finished in 27:30, which is the exact same time as I ran the 5K in Corder.  I should have been much faster here in St Louis, so I am going to blame my knee, ha ha.  Or maybe the fact that I couldn't feel my toes until mile 2.

Here I am after the race: 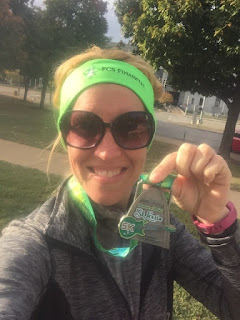 My friend Somer braved the cold and came out to cheer us on.  She was down in St Louis to run the half, but not the 5K.  I told her I was disappointed she didnt make a sign for me (and therefore all her fault I didn't PR) so she made this sign for me at the expo later in the day.  I told her it didn't count: 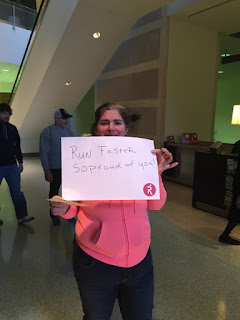 We went to the expo after the race and I like to visit with the vendors.  There was a St Louis running strore (Fleet Feet) at the expo and I visited with one of the salesman about my knee hurting.  I described where the pain was and how it felt and he said it sounded like my IT band.  He rubbed my leg and said it was very tight and sent me over to his lovely coworker Jane to rub it out.  It was one of those weird feelings- so much pain yet it also felt so good to have her work out the pain.  She easily found the sore spot and rubbed it out and of course, I bought one of the little handheld massager thingies.  Thank you Jane!

We were lazy the rest of Saturday- napping, shopping and dining out.  My friend Kristen joined us around 4:00 Saturday afternoon.  The KC half marathon was also on Saturday and Meghan read me times of the people we knew running and they were all faster than me.  Challenge accepted.

We went to bed early again on Saturday as we had an even earlier Sunday morning.  We decided not to drive in hours before the race started to park (since they were closing roads down), so we had our first adventure with the Metro Link.  We navigated it like pros though. 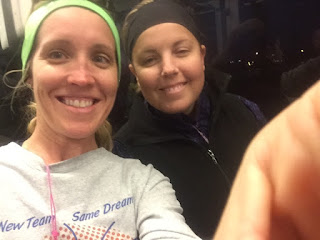 We got to the race in perfect time.  We had time to walk the 8 blocks from the Metro station, pee and boom, the race began.  I was in corral 8 and started about 7:10.  The view at the start line was beautiful!!  That is the arch in the distance. 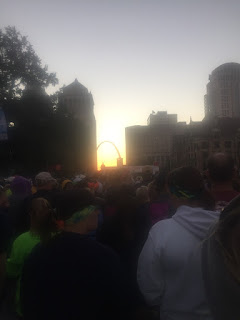 I have never run a coed half and I have never ran a half with this many people.  I think about 7000+ started out, as there was the half and a 10K starting together.  I loved the huge crowd and the enthusiasm (it just took me like 4 attempts to spell enthusiasm before spell check could even figure out what the heck I was trying to type).

I felt GOOD starting the race out.  It was so pretty, the weather was chilly, but not as cold as the 5K.  The sun was coming up and there was a guy in a banana costume running next to me- what could be better!  My IT band started hurting around mile 2.  It would hurt for about a minute and then go away.  When it was hurting, I was really worried my knee would buckle as the pain was that bad.  I am so thankful for the people who wear shirts with bible versus on them as that really really helps me when I am in pain.  I had IT pain off and on for probably about the first 6 miles and then it went away for good!!!  I got a bad stitch in my side at around mile 7 but again was able to run through it.  My back never gave me the issues I had while training, so that was great.  I starting feeling really exhausted around mile 8.5 so I gave myself the goal of walking a bit at mile 9.  But I got to mile 9 and it was a gradual downhill and I re-energized (I also remembered the Gu chomps in my belt).  I  have never felt this good during a race.  I knew I was making excellent times- times good enough to PR by far.  I have also never run this far without walking in a race.  I had heard there was a good uphill right at the end of the race.  I think it was at about mile 12.5.  I could see the finish line in the distance, but I just had no energy left, so I stopped to walk the hill.  After walking about 20 seconds, I realized how disappointed I was in myself for running almost to the end and then walking, so I started running again.  And actually, that 20 seconds of walking gave me the energy to finish strong!!!

After the race I was walking through the runner area and they were handing out blankets.   Those shiny ones that come on a roll like trash bags.  I was hot, I didn't need a blanket, but EVERYONE else was taking one and being the follower that I am, I decided I should get one too.  And thank goodness!  About 10 minutes after the race the chills set in.  The temp was still very cold.  My sweat was drying up.  I was shaking so hard.  I knew I had a long wait for my friends to finish (their wave was about 30 minutes behind mine and I am a little faster), so I found a sunny spot, hunkered down and wrapped myself up.  I think I shivered for a good 4 hours after the race!

Since I did two races, I got an extra medal- the remix medal!  Love finishing race weekends with 3 medals!! 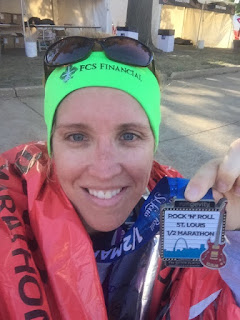 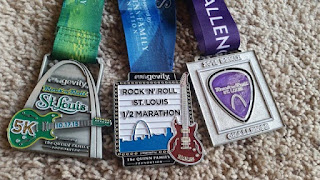 Percentage wise, I placed lower than I ever have.  I will have to improve that!

This was my favorite race hands down.  Branson was so hilly and it rained.  KC was so flipping hot and had several hills.  This race was relatively flat, it was scenic and the weather and crowd were perfect.  I loved all the rock banks playing along the course and the cheerleading groups that were out for support!