Saturday morning was the most beautiful day for a race ever!  The sun was shining and it was a cool 50-60 degrees during the race.


Since the race was just a little over an hour away, we drove down that morning.  My friend Somer, Amanda and her sister Beth all came along.  They did the 5K while I did the half.


My stomach was NOT feeling good Saturday morning.  I was able to eat my 2 peanut butter poptarts, but I felt very crampy.  I chugged some pepto and downed the coffee hoping to get some stuff moving through me.  We made a pit stop on the way there and I finally got some stomach relief (sorry, TMI).


We got there around 6:30am.  It was downtown Columbia with several parking garages and lots, so we parked right next to the starting line (NICE!!).  We checked in and the race began!


I had my goal of 2 hours but was feeling pretty negative mentally.  My stomach was having a few issues, my left IT band was hurting and I knew this course would be a lot of hills.


And the hills delivered.  We started off going uphill for the 1st half mile.  It was rolling hills for probably the 1st half of the course.  We started off through downtown Columbia, through the University of Missouri campus (my favorite place!), around the stadiums and then hit trails and neighborhoods for the rest of the race.


I ran a pretty decent pace the first 3 miles and then hit a BIG hill.  I ran the 5K at this event last year and we started on this hill and it was a struggle then.  It was even more of a struggle after running almost 4 miles of hills already.  And...I walked up half the hill.  It made me feel better that others were walking too but I hate walking within the first 4 miles!!


Once I made it to the top of the hill, everything was much easier the rest of the race.  My stomach settled down and the hills were less steep.  The trails were pretty.  It amazes me that I lived in Columbia for 4 years, less than a mile from some of these trails and had no clue they existed!


After each hill, my left knee would about give out for a few seconds.  I could tell my IT band was super tight and I was very nervous that my knee was going to collapse on me.  But it would only last a few seconds each time and only after hard hills.


My friends were at around mile 12.5 cheering me on.  I really needed them at that point as my feet were really starting to hurt.  The bad thing about trail races is there isn't good places for people to watch and this was a small race anyway, so not a lot of spectators.


I truly thought I was on track to beat 2 hours.  My GPS chimed at 13 miles and I was at 1:58.  But I couldn't see the finish line.  I sped up and realized I had to go around an entire block to get to the finish line.  I was so upset!  When I realized the finish line wasn't where I thought it should be, I had a major negative reaction and pretty much stopped.  Then my brain told my body not to wimp out, so I kicked it in.  I finished hard and passed two people in the last seconds.


I actually beat my friends back to the finish line from where they were, but I had another friend there (who is very speedy) and she was at the line and cheered me on.  There were also two other Team Beef members that finished just ahead of me, so we all got a photo together.


I went and got a massage right away.  I thought my left knee was about to collapse walking away from the finish line.  I wasn't sore, but my knee was just tight tight tight.  The massage lady couldn't believe how tight my IT band was and she worked on it for quite a while- OUCH!


After my massage, I went over to get my official results: 2:02:10.  A PR, but I was SO disappointed.  I really thought I had the 2 hours beat.  My GPS showed me going 13.34 miles, so almost an entire quarter mile further.  Not sure if that is accurate, but it really threw me off.


My feet blistered really badly during the race.  My legs (except for the IT band) felt strong and my lungs were good.  If this had been a flatter course I know I would have broke 2 hours.


After the race, we walked up to a Jamba Juice (YUM!) and then went and ate lunch at a local pizza joint, Shakespeare's Pizza.  Thankfully my stomach was feeling better at that point.


If I had run the 5K, I would have placed 1st in my division- darn!


Here are my splits according to my phone: 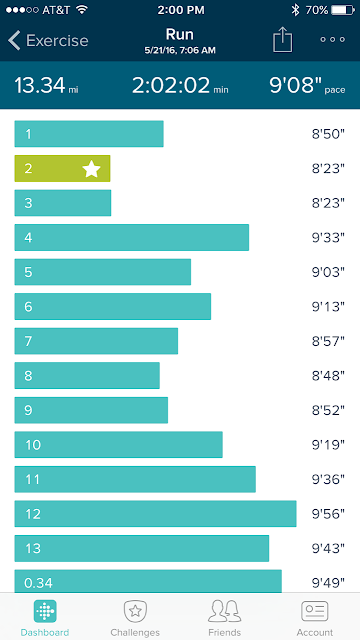 There are a few negative splits there.  Dang mile 4 and mile 12. 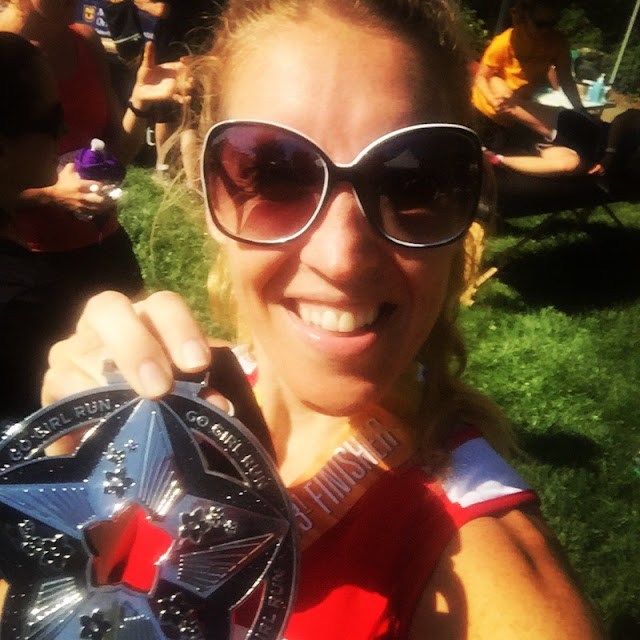 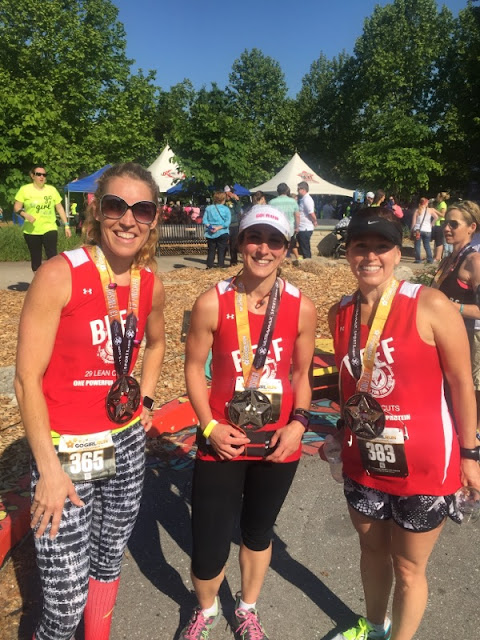 
Funny story.  Well, I guess it is only funny if you know my FIL.  He said to me, "I don't get why you do all these races.  You just lose them all and you aren't very fast!"  It sounds pretty harsh, but that is just the type of guy he is and it didn't hurt my feelings (b/c I do always lose).
Posted by sam4mizzou at 12:22 PM