Race photos have been posted!  I normally HATE my race photos but these aren't too bad.  I don't look like I am dying. 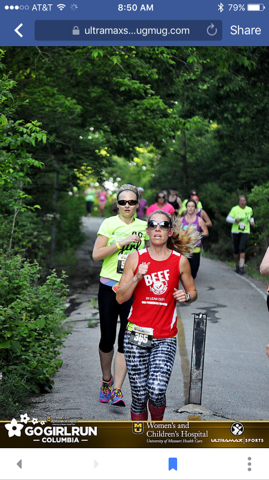 This picture reminded me I didn't talk about Gu's in my race recap.  I typically do the Gu chews, as I hate the thickness/sliminess of the gels.  Now mind you, I never actually TRIED a gel during a race but I had before a race and it kind of grossed me out.  But I realized the night before my race that I didn't have any chews.  But I did have some gels, so I thought I would give them a try.  And honestly I don't even think they were all actual Gu brand.  I had two strawberry bananas and one just plain strawberry which was a different brand.  Anyway, I decided to take my first gel around mile 4 (while walking up that big hill!).  Instead of sucking it down all at once, I just squeezed it and got a little out at a time and it wasn't too bad that way!  And I am not struggling to chew up a large chew while gasping for breath (and I was gasping while trying to get up that hill!).  But the downside...it was pretty thin consistency (which goes down pretty easy) and I got some on my hands and had sticky hands for a bit.  At the next water station I used my cup of water to wash it off.  Around mile 7 I took the other brand which was just plain strawberry.  It was much thicker so I didn't get it on my hands, but I still think I prefer the thinner consistency.  I took about 5 minutes to suck it down and timed it pretty well to wash it down at the next water station.  I took my 3rd gel around mile 10 ish.  I was back to the thinner one this time and did much better about not getting it all over my hand.  I think I MAY be a gel convert now.  Even if I feel like I am breathing well, eating those large chews can be a bit difficult. 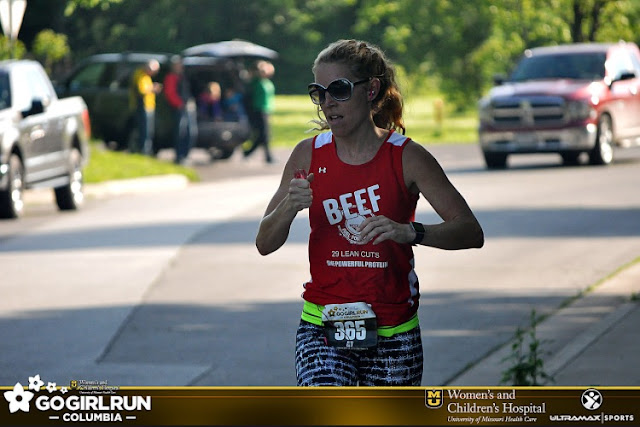 I have REALLY REALLY REALLY sensitive eyes, so you wont see me running without my big sunglasses.  I am too cheap to buy a good running pair.  I get mocked for my sunglasses obsession.


As I came to the finish line, there were two gals in front of me and I cant let them beat me, so I sprinted the last 100 yards, so I got a pretty good picture of me storming the finish line. 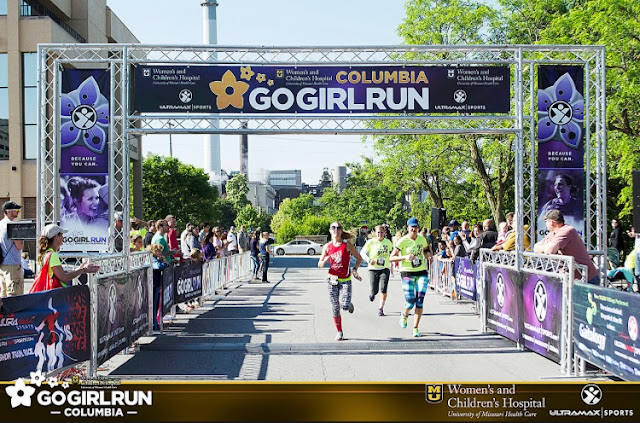 So, our sad news.  Our pig Peppa passed away Tuesday.  I checked on her Monday afternoon and she didn't seem the best, but when I got home Monday evening, she was out and about.  I took that as a good sing.  Tuesday morning she was out of her hog hut and was walking around again, which was strange, as she hasn't been getting up much lately.  I took that as a really good sign!  Jeff went down to look at her and said that even though she was up, she was a lot more wobbly than before and he thought she looked worse.  But he is a pessimist and I am an eternal optimist, so I thought it was a good sign that she was up.  But when Jeff got home Tuesday afternoon, she was down and couldn't get up.  He tried to get her up and she wouldn't even fight it and he was able to easily pick her up (which is a bad sign).  The vet said there was nothing more to do, so we had to put her down. Luckily the girls took it okay and we are going to wait a week or so to make sure there isn't any disease in our pen and maybe get Bg a new pig.


We were going to take our pigs to a show on Monday but there are some pig viruses going around and I don't want to expose my pigs to anything else so we aren't going.


We are going to the lake on Friday night and will stay till Sunday evening.


I am doing well with my macros, but still seem to have some stomach troubles so I am not seeing results this week, which is frustrating with bikini season two days away!!
Posted by sam4mizzou at 8:09 AM