I traveled to Lincoln, NE on Saturday with Meghan and Kristen to run the Lincoln Half on Sunday.


Chloe had her season end soccer tourney on Saturday.  It started at 9 and we waited to leave until 10 so I wouldn't miss all her games.  The team she was playing they have beat before, so she was pretty sure they would move on.  However, due to a few mistakes, they lost 4-3 in the last 20 seconds of the game.  It was heartbreaking but they had a good season.  Chloe has improved so much since last year and it was a blast watching her play.  The field was soaked but I am a wimp and cant handle wet feet, so I was prepared in the latest soccer mom "must have" accessory of the year- my muck boots (+/- a little pig poop)! 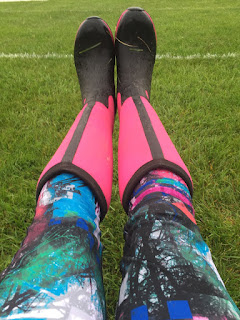 Bg also had a game that I missed.  I figured she would do her normal sit on the sidelines and cry but both Jeff and another parent texted me that she played great (well, for her) and didn't cry at all.  She was goalie the 4th quarter and stopped 3 goals!  She did good the week Jeff was out of town, so maybe she can only handle one parent at a game.

Back to the race weekend.

We left Higginsville around 10:30.  Meghan had her girls with her so they could see all their family in Lincoln.  We made good time and I believe we arrived at the Expo around 3:45.  I was really excited about the Expo as I knew it was a large race so I assumed the Expo would be huge.  I was pretty disappointed.  I realize it was near the end of the expo on day 2 but it was really tight, cramped and a lot of the vendors had already left.  I had a few things on my list I wanted to buy (socks, hat and Gu Chews) and was out of luck.  Checking in for the race went smoothly though.  It was very organized.

We met up with Meghan's parents, sister and her family and decided to go out to eat.  Her nieces chose Mexican, which wasn't my idea of a good pre race supper, but I wasn't going to argue (and it turned out to be fine).  Her aunt and uncle met up with us and we had a dandy of a time.  Meagan's parents took the girls and they all went off to stay at Meghan's sisters while Meghan, Kristen and I stayed at her aunt and uncles.  They were excellent hosts and we had a very good, relaxing evening.  Best part...I got a bedroom completely to myself and we were 20 minutes from the starting line!!

We decided to leave around 6:15 for the race so I set my alarm for 5:40.  I woke before the alarm so got up around 5:30.  I had all my stuff laid out, so I got myself dressed, had my coffee and ate 1.5 peanut butter pop tarts.  We weren't going back after the race, so I also packed everything back up.

The forecast was about 45 degrees with a chance of rain during the race.  I wore a dry tek long sleeve tee, my Team Beef Jersey and a light jacket.  I also wore full length tights and for the first time compression socks from ProCompression.  When we got there, we had trouble finding a parking spot and then walked about 1/2 mile to the starting line.  The race started on the University of Nebraska campus (beautiful campus!) so we had use of indoor bathrooms (so so so nice!) and hung out inside waiting for our waves to start.

There were 13,500 people signed up for the marathon and half.  We were assigned start times based on our expected finish but since Meghan's sister signed me up, I wasn't in the wave that I wanted to be.  I was in the expected finish time of 2:40-3:00.  Remember my goals (A- 2:05 B- 2:07 C- 2:10)?  The rules say you cant start in a faster wave, but I went ahead and snuck in.  While waiting for my wave, it started raining but I found a trash bag on the ground and made myself a poncho (it was a clean trash bag in a box, not a random used bag).  Not sure what exact time wave I started and silly me didn't even look at my watch when I crossed.  I have never run in a race anywhere near this big and it was so neat starting with so many people.  I was being a bit of a Debbie downer and was pretty sure with such a huge crowd I wouldn't be able to PR.

I didn't turn music on b/c I was told that there would be people lined the entire course with lots of music and I enjoy the crowd.  Around 1/2 mile mark, I saw Meghan's family and got high fives from her girls, but that was the last I ever saw them.  I did the first mile at 8'58.  I felt GOOD but was worried I was doing the firecracker thing again.  Mile 2 was right at 9 minutes and I still felt good.  I slowed down a bit and hit 9'20, 9'17 and 9'23 for miles 3,4 and 5.  The rain let up a bit and I was getting hot, so I took off the homemade poncho and tossed it aside.  I still felt good and my legs felt strong, so mile 6 was 9'02 (pretty good negative split!).  Mile 7 was a bit slower (9'20) as we got onto a pretty narrow trail for several miles.  The rain also picked up (dang me for getting rid of that poncho) and I got boxed in a lot.  I got kind of tangled up with some marines running in a formation with big flags and had a lot of trouble getting around them.  The flags were wet and were whipping in the wind and the path narrow, so I used up some time getting around them.  Not sure at what point I realized I was no longer getting my splits, but I passed mile 8 and realized I hadn't heard my last two splits so I went ahead and took out my headphones.

Mile 9 was a hill.  It wasn't a horrible hill but it was long.  The crowd was great on this hill and they really offered a lot of encouragement.  I run up the hill with another lady and we had a nice conversation.  We passed a lot of people and when my legs felt fatigued, I remembered to use my arms and pumped myself up.  I was still feeling pretty good.  I had no clue what my time was, but I knew based on my first 7 miles I was doing great and since I wasn't slowing down to walk, I knew a PR was in sight.

I was pretty much in awe of how good I felt.  The last few weeks of running have been a struggle.  I was pretty wet and my feet were cold but my breathing was great and my legs were tired but still had life.  At mile 10, I knew there was no way in heck I would walk- I was determined to say I ran the entire thing.  I was counting backwards in my head.  30 more minutes, 20 more minutes, 15, 10, etc.

We finished in the stadium on the 50 year line.  Right when we entered the stadium, a chick charged past me and I though, "my legs still have life" and I took off and finished stronger than I have ever finished!  It was awesome!  I didn't even look at the clock as I crossed, as I had no clue when I started so I knew it wouldn't mean anything to me.  There was a bottle neck to get into the food area, so I pulled out my phone and my FitBit app had crashed at mile 7.25.  I am getting really frustrated with the app, as it has crashed multiple times in my last few long runs.

I got my chocolate milk, cinnamon donut hole, half banana and blanket and headed upstairs to the massage room.  I felt good, but a free massage is a free massage and I knew I had plenty of time to kill.  Luckily the massage area was heated, but I doubt it was much warmer than 60 degrees.  My sweat got really cold and I could not stop shivering.  My neck/back hurt worse than my legs due to the shivering.  I got my massage and went back downstairs.  I instantly turned back around and went back up.  It may have been cold up there, but it was dry and out of the wind!  A volunteer gave me a 2nd blanket and I hunkered down in a corner.  Another runner joined me who was waiting on her MIL and she told me I could track my friends.  I pulled it up and saw their anticipated finish time was still about 45 minutes off, so I stayed put, shivering.

Around 11, I made my way out of the stadium and stood outside at the entrance to the stadium to watch for my girls.  The wind was COLD but I wanted to see them finish.  The estimated time of arrival was pretty close, so I got to cheer them on.  Runners were not supposed to be able to get back into the stadium but I just walked back like I knew what I was doing and they didn't say a word.  I met up with the girls and then met up with Meghan's family outside.

Here is a picture of my medal.  I am not in the picture as I looked like crap.  I was soaked, cold and my hair was doing some weird things (it literally started to lock up- it took me forever to comb out my dreads, ha ha).  It was nasty. 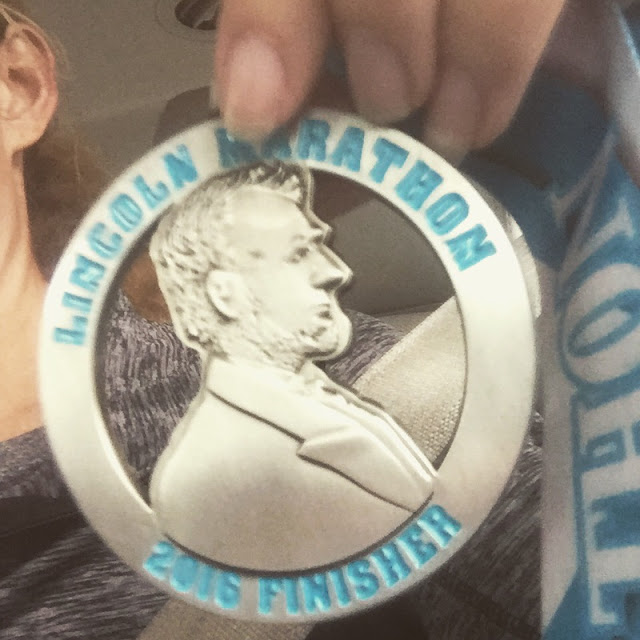 Group picture of all the finishers: 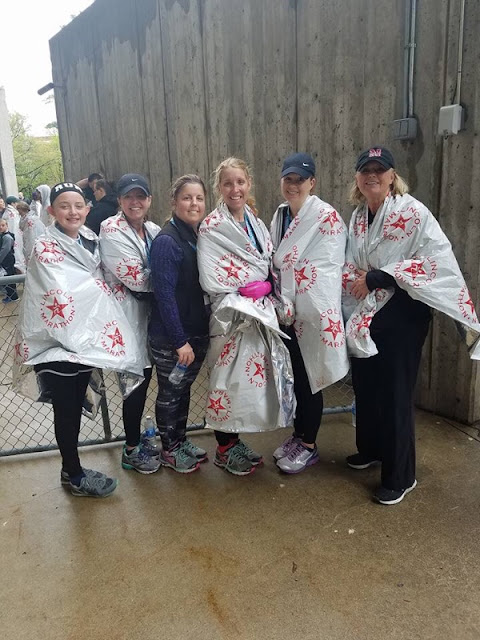 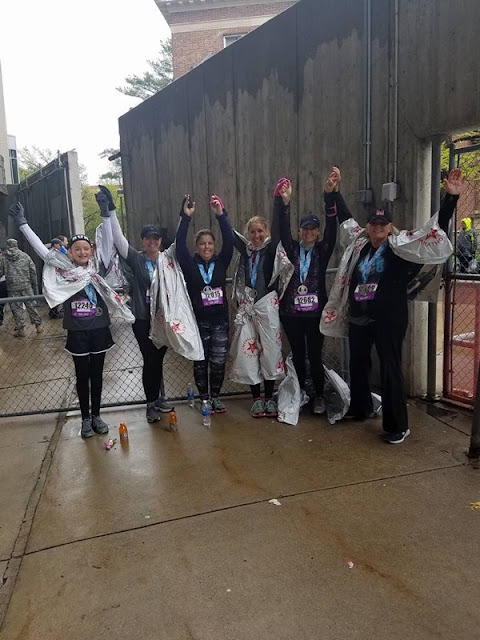 I will definitely be back for this race.  The course was awesome, the crowd was great (even though they say the bad weather really kept people away) and the finish sprint in the stadium was inspiring.

I have never felt this strong after a race either.  My legs didn't cramp, I wasn't sore and probably could have run further.  I didn't like the almost 2 hour cold wet wait but that was just due to the weather.  I don't know if it was the compression socks that made a difference but my legs never felt this good before.

I also love the stats the race gave us.  I love seeing how many people I passed! 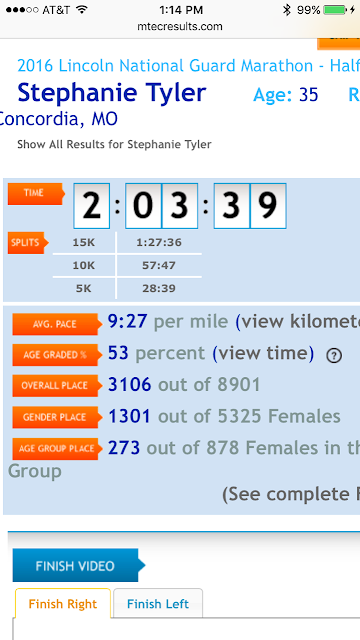 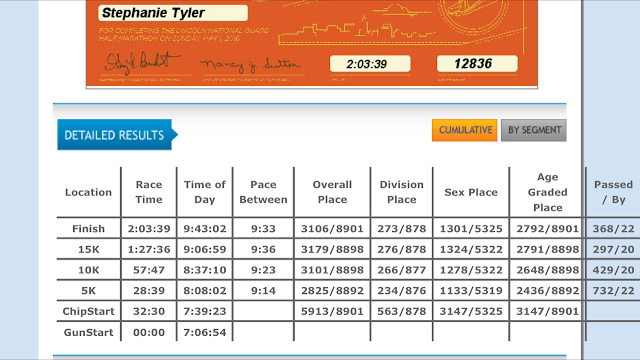 We went to Valentinos, a local pizza buffet after the race.  It was so nice to have on dry shoes and socks and eat a warm Italian meal.  I completely over ate but I needed it.  The food was honestly sub-par but I didn't really car.

We started our trip home and about 45 minutes into it, I had to have Kristen stop so I could get a coke.  I was about to fall asleep and was craving one.  It hit the spot.  We made another stop a few hours later and I got the biggest ice tea they had (it was like 50 ounce or something crazy) and it hit the spot.  You could tell I was dehydrated from the race, as if I drank that much on the way down Saturday we would have stopped 5 or more times!