I ran the Leprechaun Lane 10K on Saturday, which was part of the holiday series races I have been running.  I have enjoyed these series so far and was looking forward to the race.  My mom came along with the girls, so they could do the fun run and cheer me on.  The girls REALLY look forward to the races and are excited to see me run.


Since it was a St Patty's theme, I wore fun socks and the girls wore fun headbands.  I have the cutest cheerleaders! 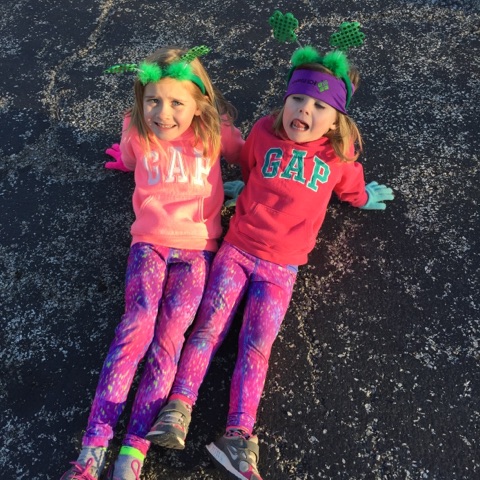 The girls did the fun run.  This is one of my absolute favorite pictures of Bg.  She has awesome running form!!!  I laugh every time I look at this picture. 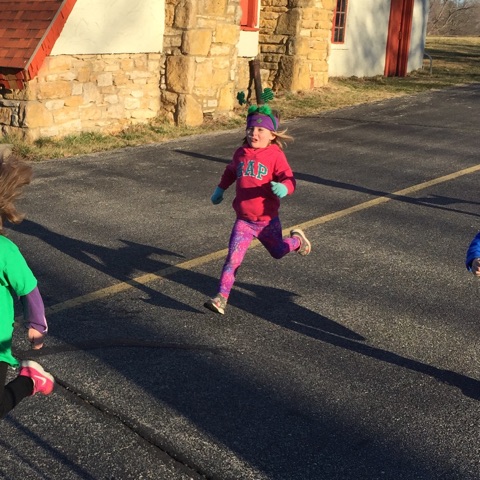 Chloe did really well in her race.  She was by far the youngest racer but hung in there.  I think she may be a good sprinter (unlike her mama!). 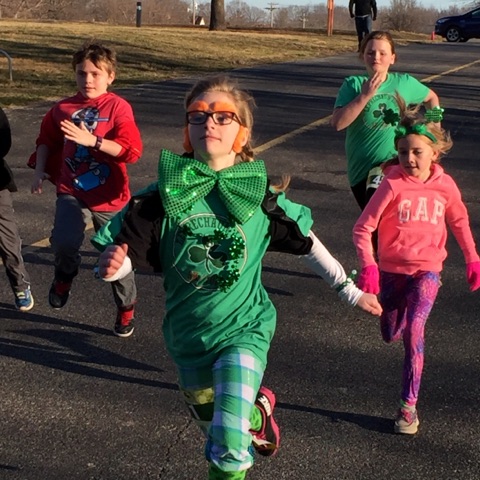 Both girls also got their arms painted while I raced.  They don't like to get their faces painted for some reason. 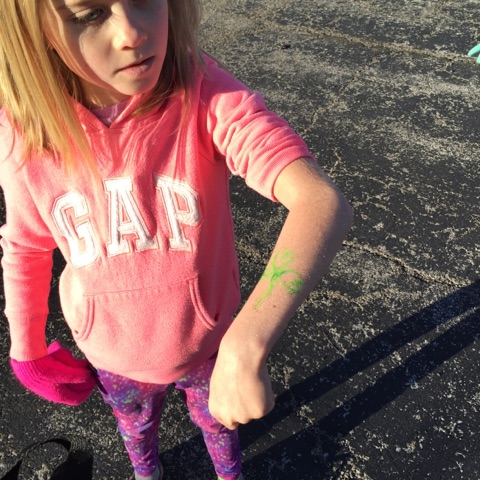 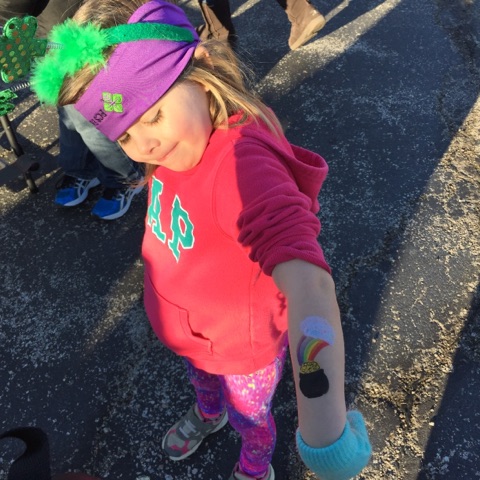 This is the last picture of the fun green headband for Bg.  Due to an unfortunate port a potty incident, the headband is no more.  I had one little ticked girl that I would not retrieve the head bad from the toilet and although I promised her a new replacement headband, the ensuing fit in front of all the other runners caused her to lose that privilege.  I do a lot for my kids, but draw the line as port a potty diving.


So, race recap.  My goal was to simply beat 54 minutes.  And I wanted each mile pace to be consistent- around 8:30-8:40.   It was a PERFECT day for a race.  The weather was great and I felt good.  They announced before the race that the 10K route had changed to include more trail, which I was excited about.  I started off strong.  I felt good and didn't realize how fast I was going until my half mile split of about 7:30.  Yikes, but I felt really really good, so I kept the pace.  The first 1.5 miles were either flat or downhill and it was super easy to keep the 7:30ish pace.  Around mile 1.5, the trail got rough and became pretty loose gravel.  I was still on pace, but turned a corner and saw a curvy hill.  A straight up, loose gravel hill.  I started up it and was struggling on the gravel.  I got about half way up and the path curved to reveal an even steeper hill.  The two guys in front of me started walking at this point and I said screw it, I am walking too.  I had just a short distance to the top and figured it wouldn't take too much time off and I was already way ahead of my goal time.  Until I got to the top of that hill and realized the path curved again, revealing an even longer hill.  I struggled up that hill and heard my split.  At the 1.5 mile split, I was at 7:36 pace.  At the 2 mile split, I was at a 9:58 pace.  Not good.  Once I got to the top, it was flat for a bit and we had a turn around.  I was able to count the women ahead of me and knew I was around 8th or 9th place.  However, at the turn around, it wasn't marked clearly and a few runners I was behind had gone too far.  Some of the runners I was close to yelled at them to turn around, so I got ahead of one chick at that point.  The return trip downhill wasn't much better.  The hill was so long and steep and the gravel was so loose, that I couldn't make up lost time going down.  I think I went down almost as slow, as I was slipping everywhere and was afraid I would fall.  Going down, I didn't see a single person running up the hill- everyone was walking so that made me feel slightly better.  I had about another 3/4 of a mile of good flat trail, but the rest of the race was pretty hilly.


My official time was 54'56.  29 seconds slower than my last race- however my GPS said it was 6.37 miles, so who knows.  It was definitely a tougher course and I am beating myself up for walking up some of the hills.  I am supposed to be getting stronger!  I don't know if I had gone out slower if I could have powered up the hills better, but I don't really think that was it.  I luckily had built a really solid lead and knew I was a ways ahead of any girl runners after mile 2.  I placed better than I have ever placed, so that is a plus. 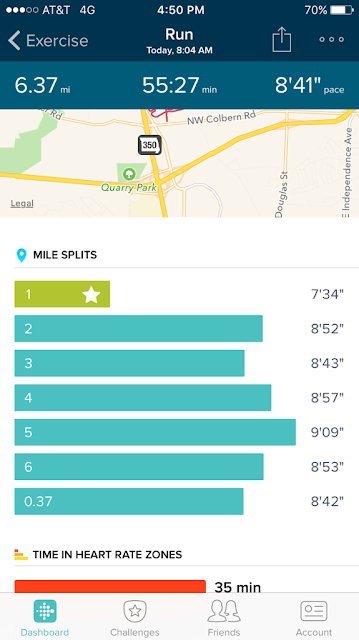 Race swag was a little different.  Instead of a winners medal, we got glasses- which I assume are beer glasses in honor of St Patricks Day.  Here is my glass (appropriately silver for 2nd) long with my finishers medal. 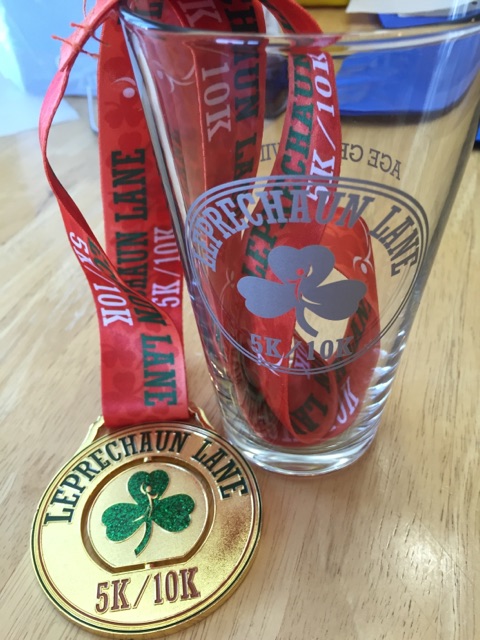 
The girls had a busy Saturday.  Up early for the race, shopping a bit with my mom, and two birthday parties made a long day.


Sunday the girls sang at church with the school choir as part of Lutheran School week.  They each had a friend over after church.  Jeff and I built the pig pen, as we will be getting our show pigs shortly.


Looks like a pretty comfy place to be a pig.  Our show pig accommodations are pretty basic for show pigs, but we don't have a barn yet.  Hopefully this fall. 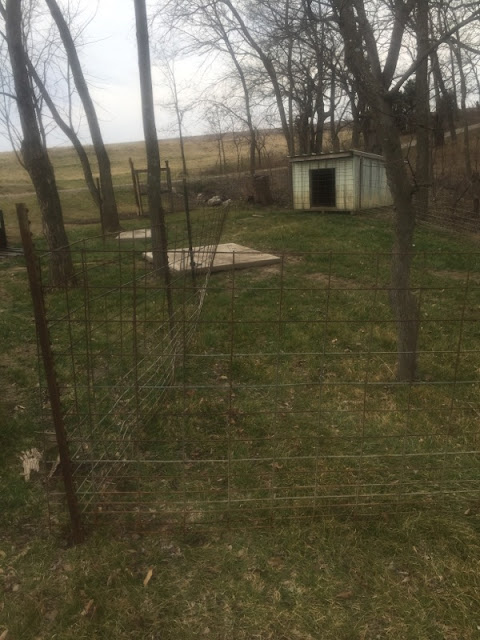 My hunky man driving the t-posts.  I had to stand behind him as he wouldn't let me take a picture.  He drove all the posts and I wired all the fence to the posts.  My hands were so sore afterwards. 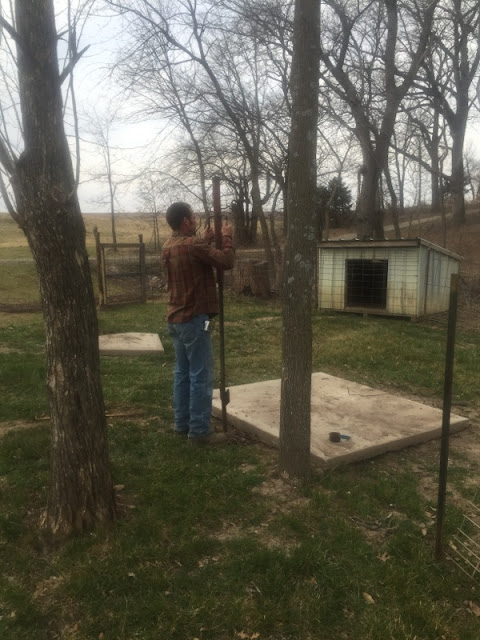 This is a far off shot of the girls and their friends playing in the yard.  I love my backyard, especially in the spring when everything is green! 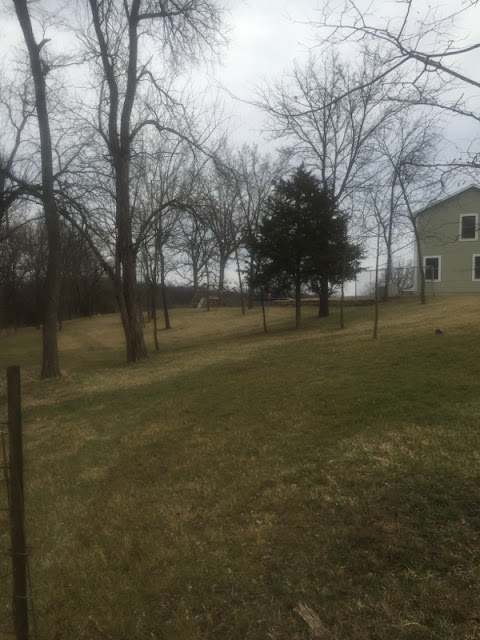 I just realized you cant see the kids at all.


In honor of National Lutheran School week, the school does something fun each day.  Monday was Muffins with Mom and twin day- where the students dressed like other kids.  Bg wouldn't let me get a picture of her and her "twins," which were two classmates.  They wore pink shirts, jean skirts and leggings.  Chloe and her friends wore their summer camp t-shirts.  I always think Chloe is tall until I see her compared to her classmates and realize she is a shrimp. 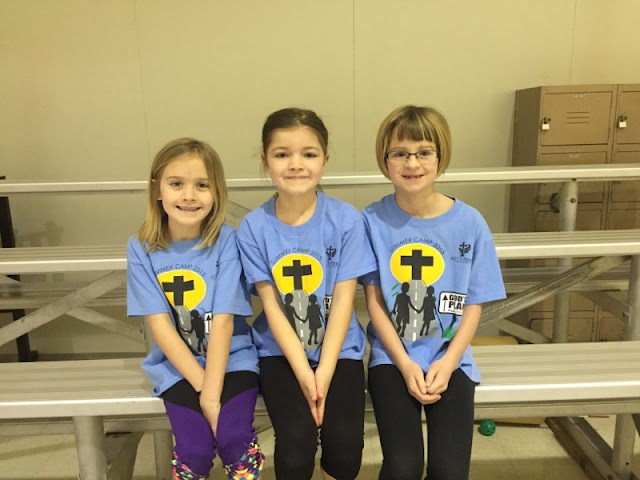 I love these two little girls and hope Chloe stays friends with them all through school.


Today was Donuts with Dad and camo day.  I forgot to snap a picture.  Chloe is wearing a camo sweatshirt.  Bg is wearing a shirt with a camo heart with what I could call a brown cow print skirt.  Totally doesn't match, but she insists the skirt is camo.
Posted by sam4mizzou at 9:00 AM