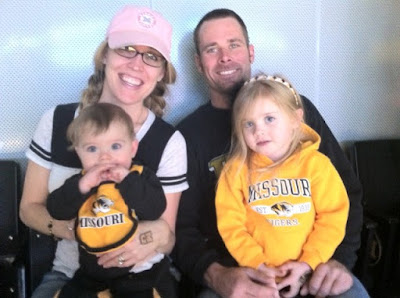 For Christmas, the girls gave me tickets for a Tiger basketball game. Tigers were ranked 2nd in the nation, so it was pretty awesome to go see such a great team playing. I was also very excited to take the girls to their first game. Chloe was pumped up and practiced cheering the entire way to Columbia. Nothing is cuter than hearing a 3 year old yelling MizzouRah! At first, we thought we had crappy seats. We were all the way in the top of the arena- the last row. But we ended up loving our seats. We were right at the top of the stairs, so we had a straight shot view down to the court. Chloe didnt have anyone in front of her, so even when everyone stood up, she could still see. She also had a wider platform to stand on since there were no seats in front of us. Of course I forgot a bottle, but was able to privately nurse Bg since we had more foot room and no one was behind me. She somehow slept through the first half even with all the noise. But because there was no one in front of us, I could still see even when everyone was standing. Of course, the Tigers won, beating a Big 12 opponent- Texas Tech. Next year we are moving to the SEC. Chloe is already asking when we can go back, so I am hoping this is the start of a new family tradition.
Posted by sam4mizzou at 7:02 AM