Warning...before reading this post, there is some bragging going on, so if you dont want to read it, you better quit after paragraph 2.

So, what made me decide to take the crazy leap and run a half marathon?  A very inspirational friend from church (who is now a dear friend!) has worked her little butt off the past year and half to lose 180+ pounds.  She was pressured by another crazy friend (ahem...Meghan) to walk a half marathon last fall.  And then run/walk another half earlier this year and then somehow got the genius idea to force pressure encourage several of us ladies from church to participate in a half marathon in Branson, MO (home of the Ozark hills!!) in May.  And being the type of person who doesnt have the word 'no' in her vocab, I readily agreed.  And then instantly regretted that decision.

But I dont back down from a committment, so after 12 weeks of training, our group of ladies hit Branson.  I was so nervous the night before!  I had trouble sleeping, but woke up ready to go.  A few other local friends were also down there to run the half and these girls are athletes- I was SO nervous then- I didnt want them to see me fail!

We had 3.5 hours to do the race.  My goal was 3 hours.  In training, I had never actually run more than 6 miles and had never actually ran/walked over 9.5, so this would be the furthest I have ever gone.  I started off in the middle of the pack.  It was a bit chilly when we started out, but I was okay in my capris and tank.  I had to pee immediately after the race started, but figured once I started sweating, I would be okay.

I started off strong.  I felt good, I had a running partner, the course was relatively flat....for the first mile or so.  And then the hills started.  Oh, the Branson hills.  The horrible horrible Branson hills.  But I did them.  I mastered them.  I told those hills who was boss!  I felt good.  I felt strong.  People were starting to walk and I started passing people.  I still had to pee, but was starting to sweat a bit, so I was hoping that feeling would pass.

It started raining around mile 4.  The perfect kind of rain- light enough to keep you cool, but not heavy enough to drench you.  Then my back started hurting around mile 6.  I had really hurt my back earlier in the year and thought that it was going to be my downfall.  There was no way I could run 7 more miles with my back hurting.  Luckily though, the two women in front of me had shirts with this on the back, "I can do ALL things through Christ who strenthens me."  I stayed behind those two chicks for a while, reading their shirts over and over and praying.  And guess what?  My back pain stopped.  I even somewhat made a friend and had a nice conversation with another runner for about a mile.  I was back to feeling good.  I passed mile 7- further than I had ever run before.  Mile 8 was another short, steep uphill.  I stopped and walked just about a 1/4 of a mile up that hill, had a quick drink and was back to running.

You know the part earlier when I said I hoped all the sweat would make my need to pee go away?  Yea, that nice, cooling gentle rain kept me from sweating.  At mile 9.5, there were outhouses and I had to go.  I went in and instantly regretted my decision.  I felt a little lightheaded and trying to get those wet spandex pants up and down was tough.  But once I started running again, I felt fine.  I walked a tiny bit at mile 10 and then was able to run again.

I ran those 1st 10 miles like a rock star!  I felt good!  I felt like I was on top of the world and was planning on all my next races.  I waved to cars and bystanders.  I talked to the traffic cops.  It was great.

Then I hit mile 11...We had driven the course before the race, but had to stop at mile 10.5 or so, due to the fact that the route then went on a trail.  I hit the trail and suddenly felt like I hit a brick wall.  My upper body was starting to hurt.  I decided I was doing great on time, so I could walk a bit.  Bad decision.  My legs immediately started cramping, so I tried running again.  And then my upper body started hurting.  Mile 11 was a painful run/walk back and forth with my mental happiness gone.  I was worried I wouldnt finish.  I regretted my decision.  I was going to be embarrassed that I started off too strong only to fail at the end.

But I made it to mile 12.  If I could make it that far, I could finish.  I took off running again and although I didnt feel great, I didnt feel as much pain as during mile 11.  Remember when I said I hadnt driven this part of the race?  Well, apparantly no one had, b/c as we rounded a curve, we discovered one last STEEP hill.  I heard a LOT of bad words...words I cant share on my blog...everyone stopped to walk up that hill.  It was horrible.  But I made it up the hill and knew I only had about a half mile left.

My goal was 3 hours.  I crossed that finish line in 2:25!!!!  35 minutes faster than my goal- even including a bathroom break.  It broke down to 11:08 minute miles.  I got a drink, my medal and wasnt sure if I should sit or stand.  I was worried if I sat, I wouldnt be able to get up.  I worried if I stood, I would fall over.  I kind of wandered around for a few minutes feeling like crud and made my way down about 100 yards before the finish line and sat.  And stretched.  And thanked God!  I did it!  I was able to cheer in the rest of my group and they all finished with great times! I even beat those athletes I was worried about at the beginning of the race. 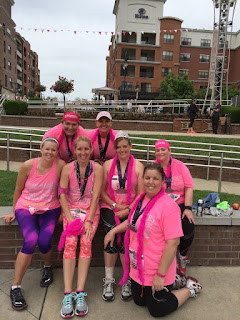 And I already have signed up for my next half...
Posted by sam4mizzou at 12:50 PM