So I decided to do something stupid and run a half marathon on the freaking hottest day of the summer, after being a training slacker for the past month.

The morning started off a bit hectic.  I met my friend Meghan at her house around 5:00 to head out early.  However, we got a call right away from Somer, who was driving separately, that she hit a deer on the way!  So plans changed and we met up with Somer, did some vehicle swapping and proceeded on our way a bit late.  Oh, and Somer is okay, I should have already stated that!

I tried my best to stay hydrated so of course that means my bladder could not handle the hour drive to the city and I made a desperate pull over to a closed gas station.  Sigh....luckily there was a donut shop next to it that after my begging/pleading and promising to come back and buy donuts, they let me use their non public restroom.  And of course, I forgot to come back and buy donuts (sorry!).

We made it to the race a little later than my comfort level, but it actually worked out just fine.  I had time to check in, pee, stretch, visit a bit and line up.  My goal from a few weeks ago was to finish ahead of Branson, so around 2:20-2:25, so I started off in the pace group between 2:10-2:30 markers.  Of course, I spent the first mile tripping over people who were already walking, but pulled ahead of the 2:10 group for the first several miles.

This race was so different from Branson.  I started off feeling much stronger in Branson and didn't feel really fatigued until the end.  However, I started feeling fatigued early on.  I had Gu Chomps with me and ate those every two miles or so, but not sure if they really did anything or not.  I wanted to run at least 6 miles before needing water or slowing down, but it was so hot.  At mile 4, there was a huge nasty hill that the lady next to me called Diablo and it lived up to its name.  I had to walk up it.  It was so steep and I was feeling weak.  I got up the hill, got a drink and pressed on.  My back started to hurt around mile 5 but I was able to run through it (which I have done in both races- I need to force myself to in practice).  I stopped at EVERY drink stop getting about 2 cups of water at each one.  I tried to drink water while running and that doesn't work.  It was pretty funny I am sure if someone was watching me.  I feel like I walked more off and on than I did in Branson.  I had my Fitbit telling me my splits and I felt comfortable at my pace.

Around mile 8 or so, the 2:10 pacer passed me and I tried to stay close but eventually lost them between my running/walking.  At mile 11, I felt strong again, even though my legs were sore.  I knew I was close to the end and I was determined to be done asap.  I was able to run the last two miles!  I however got confused with my paces and felt like I was behind my Branson time.

I got into the little mall where the finish was and was able to pick up my pace some.  I was a little upset with myself for being slower than Branson, but I was happy that I was finishing strong.  But then, I saw the finish line and realized I was AHEAD of Branson!!!  I think it said 2:22 or so when I crossed.  I forgot to turn off my fitbit immediately, but here are the splits, with the final split being about 2 minutes too long: 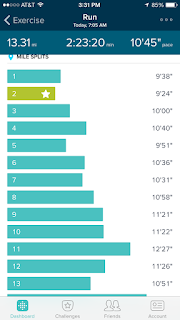 There were a few miles that were too slow, but with the heat and humidity and lack of training, I was happy with my results.  Here are the official results:

I cut about 4 minutes off my time!!!  While waiting for the rest of my group to finish, I found a nice shady spot to sit and stretch and cheer on the remaining runners. 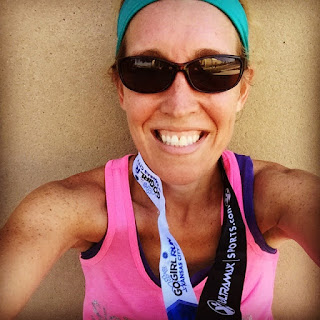 Meghan's mom took me out to lunch afterwards and got me a delicious omelet.  Thank you Jo!!