So with my upcoming 5K, I decided to work on SPEED this week.  I posted a few weeks ago a speed program for decreased mile time that I wanted to try, but here it is again: 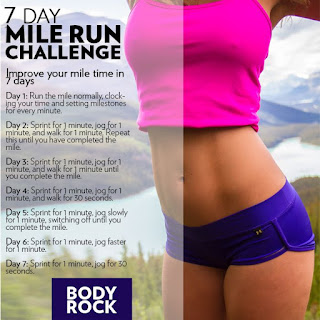 I kind of cheated and just started at day 2, so I am not really sure if I will have a basis for increased speed.

I am SO not a sprinter.  I doubt you would call the pace I ran at a sprint, but it was faster than my jog and it wore me the heck out, so I am going to call it a sprint.  My first mile was 8'47.  Which I know I can do a mile faster than that, but I was also walking part of it.  I wasn't sure how hard I was supposed to walk, so I went at a good clip, but not necessarily speed walking.

I was POOPED after the first mile, but I decided to try for two miles since I typically run much longer distances than a mile.  However, I had to stop running (jogging and sprinting) after a mile and half as I was pretty sure I was going to puke.  My stomach was VERY upset.  I have a feeling it was probably the large pork chop and baked potato I had just eaten 30 minutes prior (not a good idea!!!).  I walked another half mile and then had a good stretching session.

I have been having trouble since I started running with my left hip.  It almost feels like it is bruised at the joint.  Very tender to the touch and hurts to stretch.  However, it doesn't hurt when I run.  Weird.  I am self diagnosing myself that I don't have enough cartilage or cushioning junk b/t my hip bones.  However, I have no idea if that is really the cause.

Jeff is working out of town this week, so my nice mom fixed the girls and I that delicious chop and potato that did not sit well at all later.

We had our final softball game of the season last night and thank goodness it is over.  We played HORRIBLE!!!  Like seriously, none of us could catch the ball.  I dropped a few easy balls, our outfielders were off and our bats were weak.  It didn't help that we had two subs, as two key players were out.  One of them was at their daughters ball game but the other (and probably our best player) accidentally chopped off part of his finger yesterday and was in surgery during the game.  Anyway to get out of a game!!