Kickoff to the Country Fair

Bg had her first soccer game of the season on Saturday.  She wasn't a very enthusiastic player, but at least she didn't cry.  She had a rough practice last week so I wasn't sure how the game would go.  She got upset at practice b/c her bandaid fell off.  She was wearing a bandaid over an imaginary scratch she got from our dead cat.  The cat that died like 4 years ago. According to her, he scratched her when she was a baby and it was starting to hurt again.  Nothing like a dramatic flair! 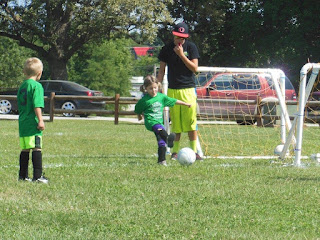 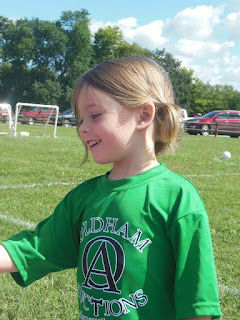 She was smiling b/c she was on the sideline.

This week starts off our local town fair, the Country Fair!  I am on the committee that hosts the very first event, the Princess Pageant!  We had 42 girls ages 5-14 compete in 5 different age groups.  And since I don't have stage fright, I got to be the emcee for the event.  I had a lot of fun being on stage with the beautiful girls and it is amazing to watch the change come over them when they are on stage.

Chloe got to compete for the 2nd year.  She won 2nd runner up last year and did even better this year coming in as first runner up!  She is such a goof, so here is my princess: 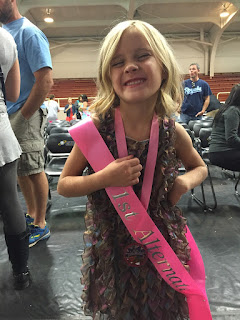 Here is the 5-6 year old court:  Her dear church friend Everly is the Queen and her two classmates and good friends are 2nd and 3rd alternates.  Aren't they the cutest!! 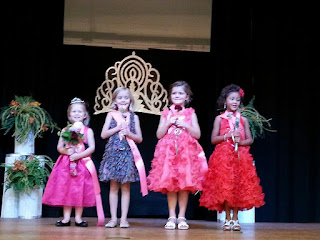 The queen is wearing Chloe's old shoes.  Pretty sure that gave her an edge, right?

The rest of the weekend was uneventful.  Church on Sunday.  The girls went to a birthday skating party for one of Chloe's friends on Sunday afternoon and they are not very good!  Chloe was much better by the end of the 2 hours but I am worn out from dragging them around.  Pictures of friends: 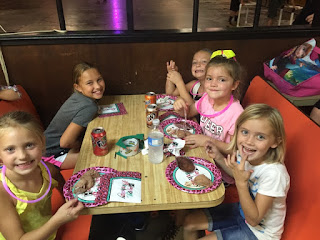 The girls played up at our neighbors house Sunday evening.  I sometimes feel like the girls are missing out some by living out in the middle of nowhere, but at least they have a few kids around: 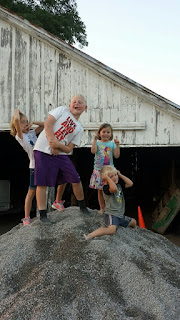 I knew I needed to get back into running to prepare for my 5K this Saturday, but my body hurt.  My hips have been ongoing for quite some time and still are sore from the half.  The rest of me was sore from setting up over 100 chairs for the pageant the other night.  I have said this many times, but for someone who runs all the time, I am sure out of shape!!