I only have one sister who (at the time my girls were born) has older girls and Jeff's sister has no kids, so I was always a bit sad that my girls would never have cousins close in age for them to play with.  I didn't have a ton of cousins my age, but I did have one the exact same age and have so many great childhood memories of playing with my cousin.  I have a TON of cousins though and it was just something I never thought my girls would have.

But....last year one of my cousins married a gal with 3 little girls, pretty close in age to my girls! Instant cousins and friends.  What a fun blessing!  Unfortunately though, these cousins live a little over 3 hours away, but they happened to live right by where I raced last weekend so we got to see a lot of them this weekend.

Bg stayed the night with the youngest cousin at their house Friday night and the oldest cousin spent the night at my aunts with Chloe.  We spent all day Saturday shopping with them and having a blast.

Branson has so much neat stuff...including this larger than life rocking chair! 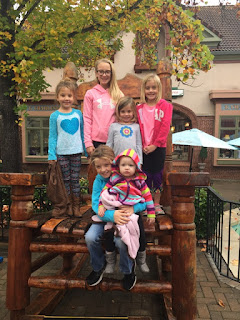 And, we even got to see Santa (yes, Santa in October!).  But this is Branson and they have a lot of Christmas stuff year round. 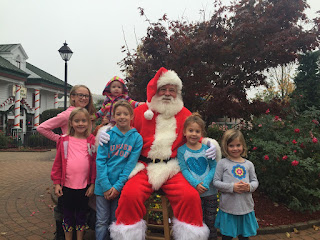 We found a giant ape to climb all over. 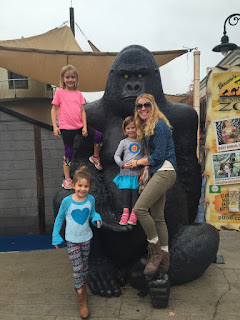 Saturday was also Halloween.  Bg was Elsa and Chloe's costume was called "Greek Goddess" but I am weird about using the term God (or Goddess in this case) when not actually talking about our Lord (the ONLY GOD), so we changed the name of the costume to a Greek Princess. 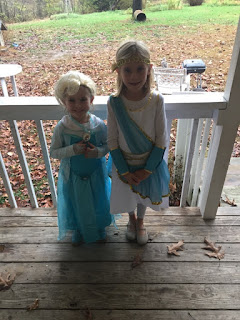 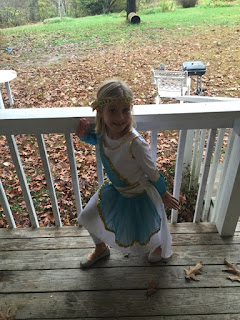 Prettiest Elsa ever!  We found this Elsa wig half off at the Disney store hours before this photo was taken- what a deal! 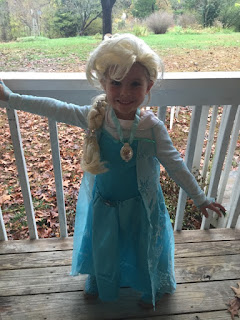 We didn't know it, but Bg's cousin was going as Olaf, so we had a pair! 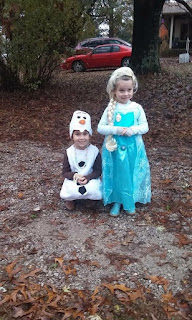 Since we were away from home for Halloween, we had to trust that our cousins knew where to go.  We stopped at a nearby church for a trunk or treat and then walked the neighborhood around the church.  It was seriously the coolest trick or treating I have ever done.  When you live in the country, you drive from house to house, so I haven't ever really seen where crowds of kids just go from house to house like they did here.  It kind of reminded me of the ET Halloween scene with all the kids in the street.  I loved it, except I totally wore the WRONG shoes.  I could barely walk at the end.  Maybe that is why my race suffered the next day.
This house was serving hot dogs, coffee and cocoa.  The yard decorations were all on motion sensors and activated scary (but fun) things when we walked by. 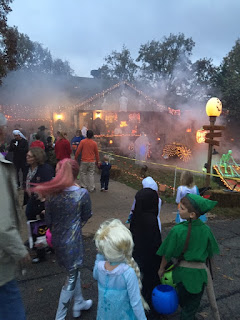 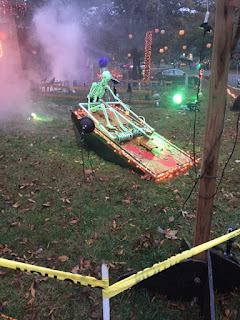 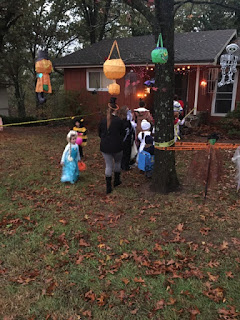 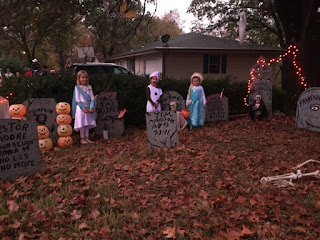 The kids went to their cousins after trick or treating to watch Halloween movies while my mom and I watched game 4 of the Worlds Series, which the Royals won.
And, the Royals made an AMAZING comeback in the 9th inning of game 5 to win the World's Series.  And this die hard fan.....was sleeping.   It was the day of my marathon and daylight savings time and I fell asleep in the 8th inning.  I missed the two tie runs to tie the game and then the several OT innings.  The last time Royals won the Worlds Series was 1985- I was 4.  The same age as Bg- a cool thing!!
Posted by sam4mizzou at 8:14 AM