I was a bit nervous that these were too lofty of goals, as I haven't ran near as much this spring as I did before last year.  But I have been working hard in the gym, so I knew I was definitely stronger than my first half (ever!) last year.


The race was about 3 hours from home, so mom, the girls and I decided to make a weekend out of it.  We headed down Friday after school to my parent's lake house, which is about halfway to the race.  We stopped for frozen yogurt on the way down and ate supper at a fun diner, where I made sure to eat beef, so I could get some good protein the night before a race!


We got up bright and early Saturday morning and headed to the race.  I ate my peanut butter pop tarts on the way there and made a quick pit stop for coffee, since my mom doesnt have any (my parents are so weird!).  We got there with about 30 minutes to spare, so I got to check in, do a quick bathroom break and meet up with my girl Meghan before the race began.  Somer has walking pneumonia and Kristen had something come up work wise, so they couldn't make it.


It was a PERFECT day for a race.  I wore a long sleeve shirt, my team beef jersey and a light zip up jacket.  I kept the jacket on for about the first half and took it off and was comfortable the rest of the race.  I wore my gloves and ear headband thing the whole race.  Several racers wore shorts and tanks and seemed comfy, but I don't get hot easily. It was a little windier than I would prefer but I think it was around 50 degrees during the race with nice sunshine.


This probably isn't the best race strategy, but I started off with the 2:00 pacer.  Running those first miles at around 10:00 miles just seems difficult to go that slow.  I knew I couldn't keep that pace, but decided to start strong, as I knew those last miles would be hard.


I stayed with the 2:00 runners for about the first 3 miles.  For some reason, I was really struggling with breathing and almost felt like I was having an asthma attack around mile 3 (well, I haven't had one before, but I imagined it felt like this).  I really had to focus on my breathing, keep myself calm (and prayed a bit) and then my breathing went to normal.


I don't know why this happens, but I struggle with breathing so much more during the first half of the race than the second.  I rarely feel out of breath from mile 6 on.  I know the miles are slower, but I don't think they are that much slower that it should make a huge difference.  I had about 2-3 other instances of my breathing attacks during the entire race and they were really weird.  Hoping it was just some crazy mental issue I was having that day.

I am very happy with my pace till about mile 9.  My right IT band was really starting to hurt and I was definitely feeling tired.  Not horribly tired that I had to stop or anything but I really wish I had some more energy.  I stopped and had a drink and small walk at mile 10.  I walked off and on till the finish.  At around mile 11, the 2:10 pacers passed me.  I knew according to my Fitbit that I was on track, so I was surprised to see them.  We visited a bit and they even stopped to walk, as they knew they were ahead of time.  They had two different tracking devices on that were telling them different miles, so they were a bit confused.  They picked up and I tried to stay with them but fell behind.


I got to the finish line and my girls were about 30 feet from the end.  I slowed down and asked them to finish with me (as they always beg to) but they were being ding dongs and couldn't figure out what they wanted to do, so I went ahead without them.  I crossed the line at 2:10:05.  I was SO excited.  I knew my time would be a little less than that.


I felt better physically after this race than I have any other race.  I know my body is stronger, I just need to work on endurance a bit.  Those last 3 miles were hard.


I got my official time card and was so excited to see this: 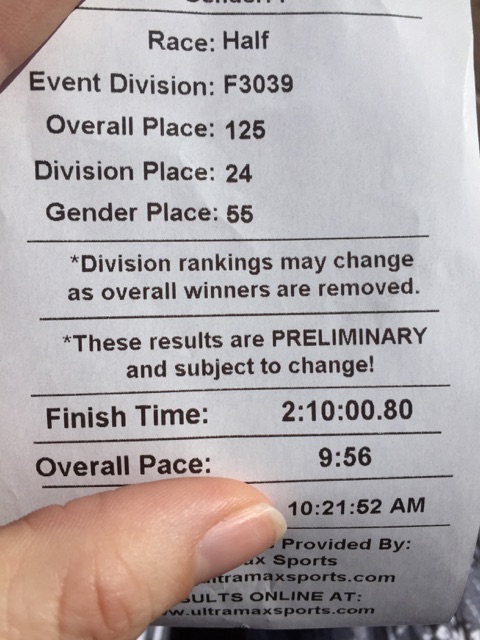 I MET MY "A" GOAL!  Cant get much more exact than that!!  Those darn kids of mine- if I hadn't slowed down to encourage them to finish with me, I may have cut a second off my time.  Here I am trying to get them to join me: 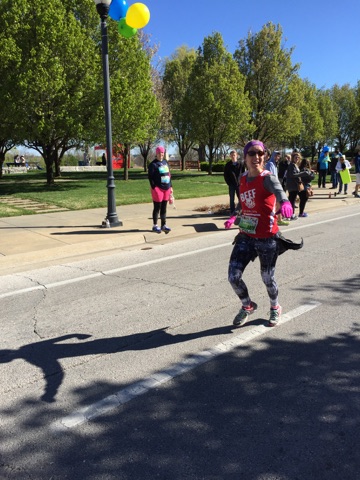 Here are my mile splits.  I am happy with times for 1-8, just need to work on keeping my strength those last 4 miles! 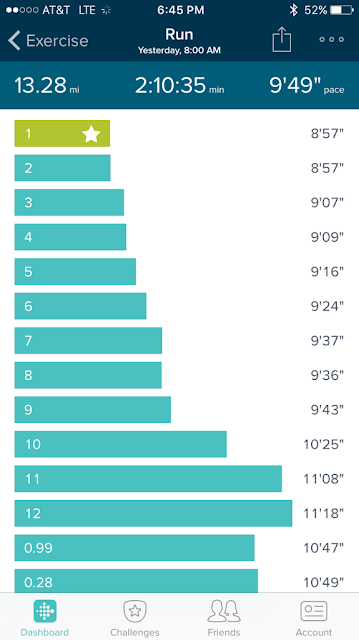 Everyone thinks I am crazy for this, but after the race, we met my aunt, cousin in law and her daughter for a zoo trip!  The Springfield Zoo is a relatively small zoo, but it is great for just a short visit.  The girls had a lot of fun.   Then we followed the zoo by the world's biggest Bass Pro Shop.  The girls love posing with all the animals: 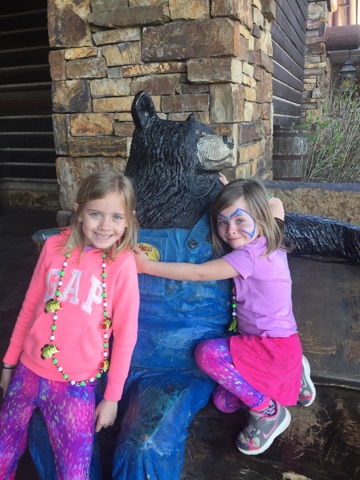 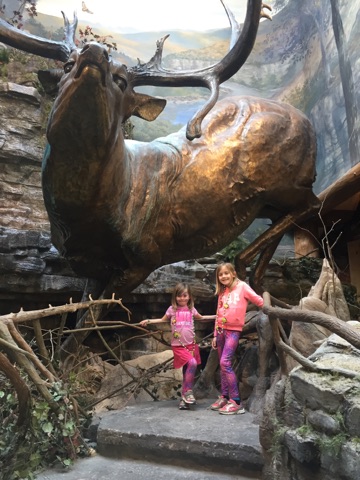 I joined in on the posing fun: 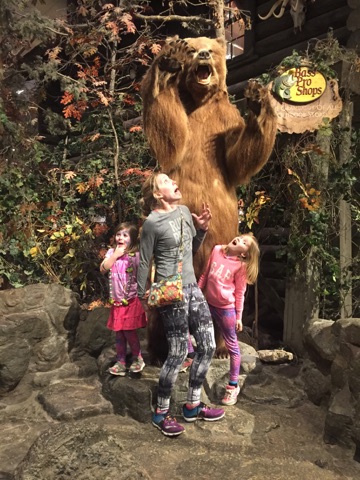 We found these bunk bed cots at Bass Pro and I really want to get them for the girls to have at the lake house. 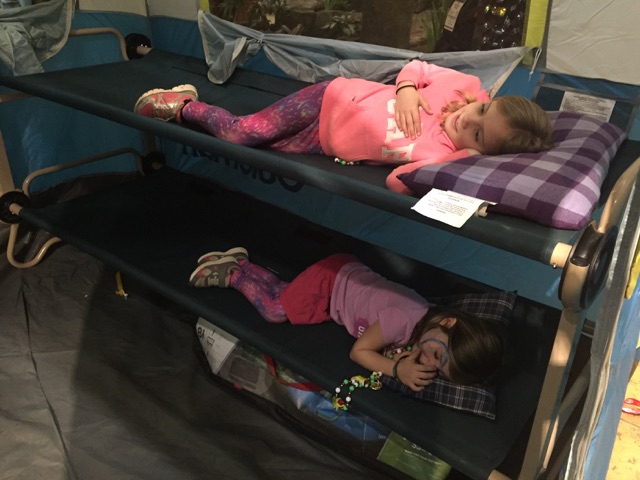 We headed back to my parents lake house after Bass Pro.  Both girls passed out immediately and I really wish I could have!  We got back to town, grabbed a bite to eat and then I thought we would go to the cabin so I could shower and sleep, but no, the girls wanted to walk on an old swinging bridge.  That's okay, running a half marathon, pushing a stroller around a zoo for hours and then wandering around Bass Pro isn't enough exercise for me, so we walked the bridge. 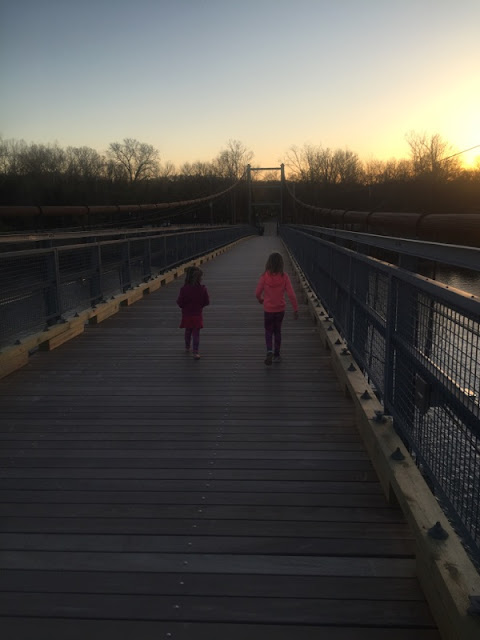 Sunday we woke up early, mushroom hunted (no luck) and then headed home. We had 4-H and it was our semi- annual trash pick up day, so I walked a couple more miles picking up trash.  I definitely got my steps in this weekend!  After 4-H, we cleaned up and then went to Jeff's church to meet the new pastor and his family.  He has an 8 year old girl, so Chloe was excited to meet a new friend.


So, my next half is May 1.  I have pretty lofty goals, but I am going to have to really buckle down on my training.