I am trying to extend my running from just one long run a week to multiple nights of running which include: 1 long run, 1 day speed work, 1 tempo run.


I did my long run (my very wimpy long run) on Saturday.  I didn't have a chance to run Sunday or Monday, but knew I could hit up the track after Chloe's soccer game on Tuesday,


Quick soccer update: Chloe played AWWWEEESSOMMMMEEEE!  She is 150x's more enthusiastic than she ever was last year.  She isn't the best player out there, but man, she is on top of it.  She played almost the entire game except maybe 2 minutes of the 4th quarter.  She had some awesome assists and wasn't afraid to get after it.  She also played goalie and didn't let anything by her.  She would dive in the middle of kicking feet to grab the ball.  I was impressed.  They don't officially keep score, but all the kids do.  It was 6-4.  Chloe's face anytime her team scored a goal was priceless.  She bent her head over with a little grin and mouthed yes while pumping her elbows.  It was adorable.


Back to running...since it is track season, I cant run on the track just whenever, but the track was empty after the game.  I was pretty excited to run on a soft, smooth, flat surface and to really test how well my technology clocked my miles.  I ran a 1 mile warm up in a little over 9 minutes.  I felt like I struggled a lot in that warm up, but first mile always seems hard to me.   My plan was to then do about 3-4 speed miles with a half mile cool down between.  I did my first fast mile in 7:28 ( I know, not that fast compared to other runners) and it really wiped me out.  I ran a slow half mile and realized I honestly did not have it in me to do another fast mile, so I just finished that half mile out a bit faster and called it a day after just 3 miles.  I am disappointed in myself, but I also know I need to listen to my body.  I have had a nasty allergy cough for several weeks now that keeps me up a lot at night.  Plus work is pretty stressful right now, so I think my body is telling me that it needs me to just take it easy. 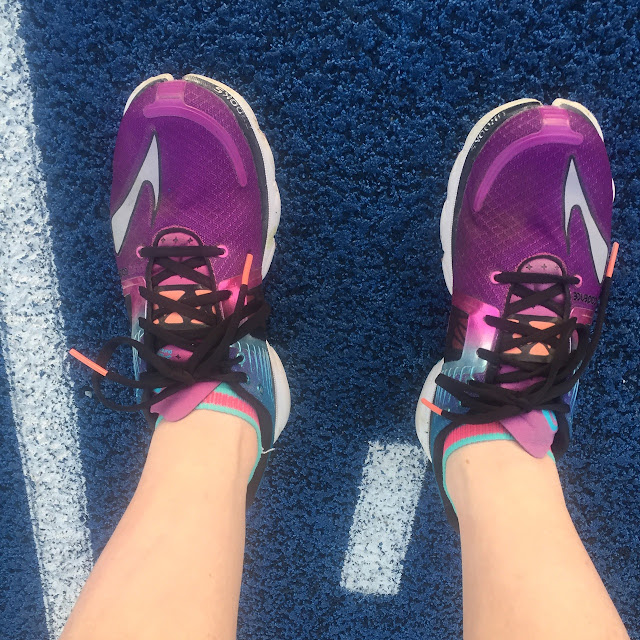 I think these are the coolest tennis shoes I have ever owned.  Brooks Pure Cadence.


I did the gym thing Wednesday night and felt pretty strong.  Hopefully my energy comes back soon.
Posted by sam4mizzou at 11:34 AM